Looking Differently at the Difficulties in Your Path
Serving or Spoiling? What’s the Difference?
Motivation and Recognition to Serve

Subscribe to this Podcast (RSS) or iTunes or via Flipboard

The post-Summer activities of Shinnyo-en often follow a bounty of community service events traditionally marking the preparations for a long winter ahead by making sure everyone has enough of what they need to keep going through the coming months. August is also the month we observe and remember the principles and teachings of our Dharma Mother, Shojushin-in.

Shojushin-in herself experienced a childhood that was riddled with hardships. From these, she gained strength of character and the ability to “interpenetrate” with others — meaning she could relate deeply to people and identify with both their struggles and joys. Her warm encouragement and guidance became an indispensable part of the Shinnyo Path and continue to this day to support practitioners in seeing their circumstances differently and in living life with more hope and purpose.

She once said, “Life may throw at you certain difficulties that may not be easily avoided. But when you do your best, acting on your belief that there is no hurdle that cannot be overcome, then a path without regrets will unfold. When you make that kind of effort to overcome a certain hurdle, you will actually feel—personally experience—how the ever-­- present lovingkindness and compassion of the buddha realm constantly support and nurture us.”

In putting into practice, one of the Three Practices, giving service to others, you might find this particular practice takes many different forms. Sometimes it means just giving another person a helping hand to accomplish something or assist someone through their daily life. Other times it might mean placing a bag of the extra fruit or vegetables produced by your garden out on the curb for others to take freely. Maybe it’s participating with a larger group in a community clean-up effort or a public service event.

There is a subtle distinction between being of service and “spoiling” someone. Think about the difference when you ask for or need help from someone because you truly can’t do something versus when you ask because you want to avoid doing it or simply don’t feel like doing it.  This difference is what builds positive merit versus negative merit in terms of overall karma. Encouragement of someone’s avoidance or simply lazy behavior by giving or doing is most often motivated by feelings of guilt — meaning you feel guilty for not giving a panhandler money or a child who begs for another toy.  Compassion comes from being able to “step into the other person’s shoes” and realize how your assistance impacts their lives. Does the act empower the person to change themselves and accomplish more, or does it actually reinforce imbalance and make the person more dependent on donations and gifts?  Think, first.

On August 23, a portion of the Murayama site (1.4M sq. meters of land originally used as a manufacturing plant, acquired by Shinnyo-en in 2002 from the Nissan Motor Company) will be opened to the public. As the first part of our plan to convert it into a more ecologically balanced, green oasis, we have built a soccer field of natural grass that will be officially opened and dedicated with a children’s soccer game. Shinnyo-en plans to further utilize this expansive area for the benefit of the public and is currently working with landscape architects, ecologists, and governmental bodies on projects that include soil enrichment and reforestation according to a recent newsletter from Shinnyo-en’s HH Keishu Shinso.

On September 21  the autumnal Higan (Coming-of-Fall service) in a Christian church for the first time. Called the “Shinnyo Celebration on the Equinox: Sharing the Light of Peace,” it will be held at St. Bart’s Episcopal Church in Manhattan, New York. The next day, September 22, 2013, we will hold another event, this one for the general public: the “Shinnyo Lantern Floating for Peace” in New York City’s Central Park.

In Southern California, on Sunday, September 8, 2013 from 11am to 3pm, the Los Angeles Temple will host its annual Harmony Festival bazaar including food booths, multi-cultural music and workshops, and the ever-popular “garage sale” filled with new and lightly-used items at low prices.  Mostly a financially break-even event, and not a fundraiser, it’s more an exercise in re-balancing those who have excess things giving to those who need them.

Back in 1965, when Shojuishin-in (Shinnyo Dharma Mother) was addressing the Chiryu Gakuin (Missionary School) students, she made the following observation about giving:

“When you wholeheartedly exert yourselves with all your sincerity, then the buddhas, the dharma protectors, and the Two Dojis will surely recognize your efforts. It doesn’t matter whether or not others acknowledge what you’ve done.

If you do your best only when others are around to see your efforts, then you can’t say that your mind and heart are one with those of the buddha realm. We can’t call that way of practice correct.

You’re not the one to recognize or value what you’ve done. That’s something others do. What your actions merit is decided in the buddha realm.” 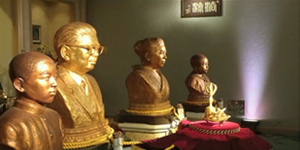