Where I can keep track of the special events (note: these are not “parties” as so many people are misled to believe) at OOW:

Feel free to post your own additions in the comments.
Advertisement

Jeremy (owner of the Vent Bees) captured the history of what the trap-out on this looks like this video:

And here you see the early buzzin’ and pawing at the new box, which was packed with a bunch of old comb from an earlier cut-out:

And here’s some photos of the pre-relocation work:

So, Jeremy’s Dryer Vent trap-out worked about 50% – they managed to be orderly enough to persist in slowly entering the trap-out cone one-by-one over the past 3 weeks.  After taking the box down for inspection, some of the trapped-out bees had set up home inside and started caring for the uncapped brood and building burr comb to attach it to the frames and box walls. But with neighbors starting to complain about the buzzing, we decided to move ’em out.

The vent has a 5″ x 6″ opening, leading to a 1.5′ x 1.5′ x 8′ non-functional space left open to the outside world.  (and filled with not only bees, but also paper wasps, wood borer beetles and a couple of roaches).  This was the result of a interior remodel, which should have included sealing-off or at least screening-off the opening.

Putting in a borescope (from ThinkGeek) only showed a lens absolutely full of bees (rather curious bees poking at the LED lights and wondering what creature this was).  Brought out the bee vacuum and captured most of the visible first layer off of the trap-out cone face, and those visible from the vent.

There was about 1/2″ thick stucco surrounding which would cause too much siding damage, so we opened up the dryer vent using tin snips like a can, folding aside the flaps. Puffed in a little smoke, but the sound change sounded wrong, and I noticed the bees had vacated the entire first layer of comb when the smoke came in.  So we put the smoker aside and instead decided to opt for the gentler sugar spray and leave them on the combs method.

Yuka had to vertically slice some of the combs to fit through the opening, but one-by-one was able to gently remove each comb, with most of the bees still on the combs.
After all the combs were out, another session of vacuuming to remove the straggling bees and finish by foaming the vent with a backer board using self-expanding foam to keep out the future intruders.
Final tally, 6 medium frames of comb. And a foamed up vent.  And Jeremy now has his first experiences with trap-outs, light demolition, vacuuming, framing, packing up a moving hive

This was originally classed as a “difficult” to “impossible”cut-out because of: 1) rather sensitive bees that were really bouncing off of veils at the slightest vibration of the tree, and 2) the lemon tree had been left to grow untrimmed for probably the better part of a decade and all of its branches had become intertwined into a nest of inter-connected twigs without a central trunk.

Yuka and I spent about 2 hours carefully pruning with a sharp Fiskars pole pruner (without the saw blade) until we had cleared to the main branches.  Once the outer frass of branches was trimmed away, an extension ladder fit nicely against 4 central branches to get a closer look.  Turned out the colony had placed 90% of the comb mass against only the main branch, and the others were simply growing around it (with a little burr comb to further strengthen the mass.)

I guessed at using pruning loppers to cut free the top-most branches and the comb stayed nicely intact only on the main branch.  This allows a “standard” t0p-bar cutout rescue similar to what I did with the palm frond colony (snip both ends and lower the whole thing to a receiving box and trim to-size).  Because the branch is quite curved, to maintain the uprightedness of the colony, we chose to sit one end on the box bottom, and support the other end with a forked stick from other tree trimmings.  One more in the middle braces the mass, and duct tape creates the desired side-to-side stability for movement.

No smoke used at all.  Only 1:1 sugar water spray with vanilla.  Bees stayed completely sane the entire time all the way into the box.  We dimmed the lights around before cutting and used my head LED red light to do the downward movement – but they didn’t mind white light while I was cutting.  This is how I really like to see relocations work. 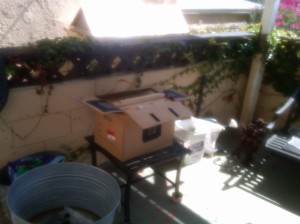 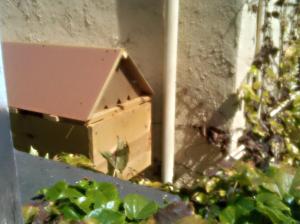 These are from a recent rescue over at the American Lutheran Church of Burbank (living quite happily in their new filebox TBH – it’s a small colony).

And next door, they have a new fascia that helps keep it warmer at night.